The seven year old youngest youtuber in the world Ryan ToysReview makes $11 million in money a year. He has 18.2 million subscribers for his channel. It is fascinating to hear about YouTube statistics as most of them will amaze us. 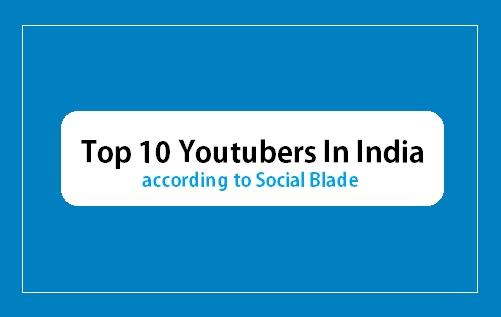 As per the latest updated chart from SocialBlade, T-series is the most watched youtube channel in India. Now hear about the top ten YouTubers in India and their amazing statistics according to Social Blade.

The music channel, T-series stands top in the chart with 9.8 crore subscribers. The number of videos that the top youtuber in India has uploaded yet is 13,366 videos. The views it got in the last 30 days according to social blade analytics is 276 crore. It also earned 40 lakh subscribers over the last 30 days. The estimated monthly earning as listed by Socialblade for T-series channel is $691.3K to $11.1 million.

Sony SAB with 23, 256 uploads is the fourth top youtuber in India. The channel was created on August 4, 2007. The estimated channel income is monthly $248.7K to $ 4 Million and yearly $3 million to 47.7 Million. The channel has about 1.9 crore subscribers as per the latest report.

According to Socialblade, Zee Music channel’s estimated monthly income is $211K to 3.4 Million and yearly income is $2.5 Million to $40.7 Million. It is to be noted that Zee music made it to #5 with just 4,197 uploads and in 5 years of time.

The music channel has a 2.3 crore subscriber count and estimated monthly earnings in between $97.5 K and 1.6 Million.

Zee Marathi stands second among the top ten Youtubers in video uploads. The Zee Marathi has a gallery of 74,555 videos. The channel was created on Nov 8, 2017. The channel has 43 lakh subscribers up-to-date. The SocialBlade rank of ZEE Marathi is 47. The estimated earnings of Zee Marathi is $64.2 to $ 1 million monthly and $770K to $12.3 Million yearly.