After the world cup tournament, team India is heading to West Indies for the West Indian cricket tour which includes 3 ODI’s, 3 T20s and 2 test matches. The BCCI selection panel led by MSK Prasad announced the Indian squad for the West Indian tour on Sunday (July 21). The Indian team will be led by Virat Kohli in all three formats. India’s tour in West Indies kicks off with a T20 match on August 3. The first match in the tour will be held in Florida. 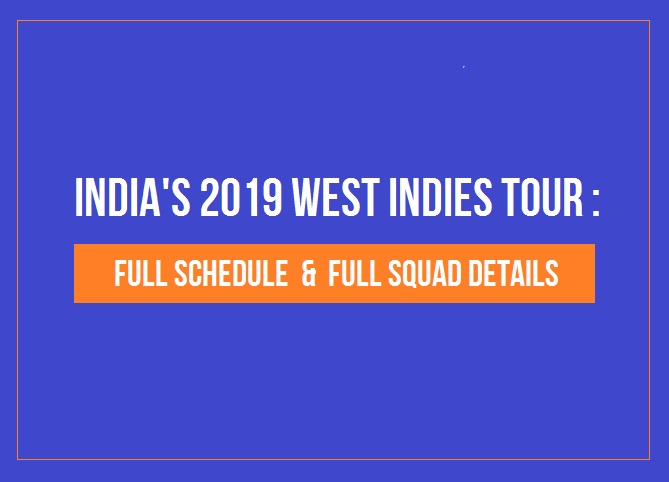 There are altogether 8 matches in the tour schedule-Three ODIs, three T20 matches and two Test matches. The tour matches are scheduled from August 3 to August 30. The squad has Ravichandran Ashwin, Ravindra Jadeja and Kuldeep Yadav in the spinners wing. Wicket-keeper Rishabh Pant, Kohli and Rohit will play in all the three formats of the tour.

The match fixture and schedule for India’s West Indies tour is as follows:

Scroll down below for the Indian squad members list for the ODIs, T20s and the Test matches against West Indies.

The tour starts with T20 matches. Here is the 15-man Indian team for the T20 format

For the One Day Internationals, the squad India is as follows:

The test series will begin on August 22 and following is the team playing in the Test matches.